Do we not bleed? 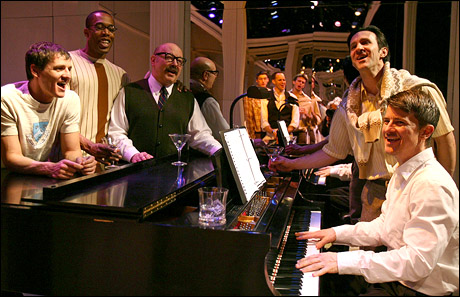 Seeing Some Men at New York’s Second Stage Theater reminded me of an old Gil Scott-Heron lyric, one warning the establishment that “the revolution will not be televised.”  Playwright Terrence McNally’s panoramic look at the lives of American gay men over the span of 80 years shows “a people’s” collective journey trod in the shadows—everything from clandestine assignations in bars and baths, to gay love pursued despite the tyranny of families, bosses and the military.  McNally doesn’t pull his punches, serving up the current mania for gay adoption (and our tendency to treat babies as just another accessory) and a pre-Stonewall era when “straight-acting” gay men treated drag queens with the same scorn and loathing that light-skinned blacks inflicted on those with darker skin, or that Anglo-Protestants once ladled on the Jews.

But in a telling scene, McNally makes a marvelous point.  Two gender studies majors from Columbia have an opportunity to interview an older gay couple about the lives they’ve led as gay men.  The disconnect between generations is predictable (and hilarious), but the older couple illustrate that by simply being, by claiming what you need as an individual to live, proves the radical act; it wasn’t always easy but “they got around it.”  That they took the cards dealt them and soldiered on seems not enough: piqued by such passivity, one of the students all but accuses his elders of laziness.

McNally seems to be telling us that while revolt has its uses, sometimes real political action is personal, generating ripples that are no less profound.  Growing up black in the Midwest, I remember my mother’s take on racism.  She believed the cure began in your own backyard—and at the supermarket, the bank, on the bus or wherever people interacted.  Racist attitudes were hard to hold on to if you actually knew someone whose skin was different from your own; before long it dawns that people are people despite what lies on the surface.

Or who you sleep with.  Yep, gays are in the papers.  Activists are out in full force to get Albany and Washington to make us legal (thank you Eliot Spitzer for taking our part), but really, it’s the straight guy in your office, or the red state folks who needs swaying.  It makes me hope that Some Men has a long life in regional theater, for despite its flaws McNally accomplishes one thing brilliantly: he gives gay people a face, and guess what? No one has two heads—on the contrary, we’re as normal and boring as the breeders next door.