Pretty is what changes 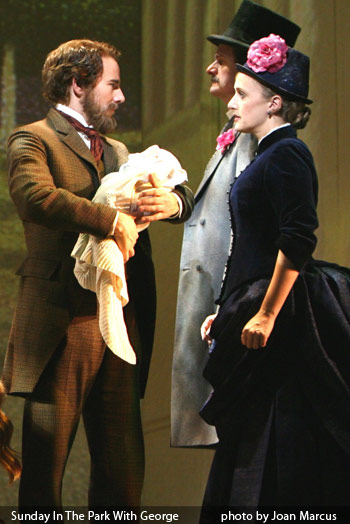 My war with memory continues.  Watching the Sam Buntrock directed revival of the Stephen Sondheim/James Lapine masterwork Sunday in the Park with George, I thought how hard to judge the merits of anything when the mind, enamored (yes, I was but one of thousands of theater nerds who made the Shubert Theater his second home during the original’s run), fights to let go of a 24 year-old transforming experience.

That it took a while for me to get on board had to do as much with the past as with what unfolded on Studio 54’s stage.  Days after, Daniel Evans’s smiley interpretation of George has yet to claim my affection but Jenna Russell’s charms as Dot (and especially, as Marie) are undeniable.  Some of the tempos left me shaking my head (what was served by taking “Everybody Loves Louis” at a snail’s pace?) but the physical production more than captures the mystique of art, and the artist.  Still, it wasn’t until Dot, pregnant, distraught and about to depart for America, sings ‘you could tell me not to go,’ that my heart finally co-opted my head.  Thanks to the craft of Lapine and Sondheim, the show, impervious to interpretations of performance and direction, emerged and refused to let me go until its end.  Score one for art.