Secrets and Lies in Old Salem 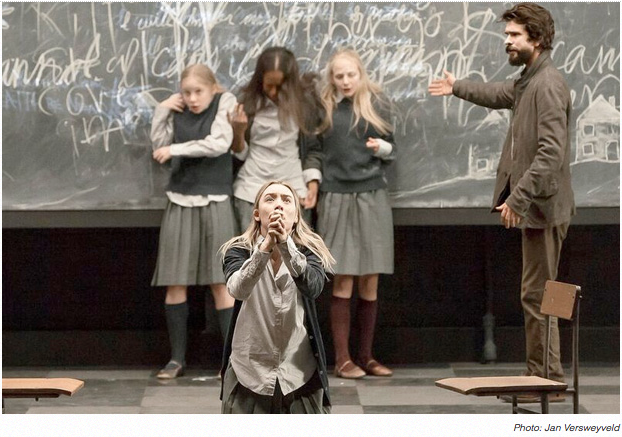 Contrary to what the cynics among us might think, revivals of plays and musicals exist not only to bring in theatergoers desperate for the tried and true. Successful ones rely on a confluence of factors: a director (Ivo van Hove, who, evidenced by this current theater season, should now be allowed to direct everything—everyone else, go home) with an original eye and a secure grasp of stagecraft. A ensemble in tune with the writer’s poetry, and each other, helps, as does the timing of the production, though that’s something no one can predict or engineer—one can only hope that what unfolds onstage holds a mirror to nature in ways both current and eternal.

The Crucible checks all those boxes. By the time that curtain rings down at the Walter Kerr Theater, the audience will have no doubt that they’ve witnessed a tragedy in Arthur Miller’s drama about a town set aflame by false accusations of witchcraft in 1600s Salem. But the subtextual story (originally inspired by Joseph McCarthy and the Communist witch hunts of the 1950s) is the one that haunts because it’s currently playing out in our backyards, and on the national political stage. We still persecute difference. The law (no separation of church and state here) remains as capricious as it ever was when it comes to meting out justice, or protecting innocents whose presumed guilt seems a foregone conclusion. The big tragedy for me this time (The Crucible is a play that has haunted me since drama school) was the sight of neighbors turning on neighbors with terrifying swiftness -Miller’s depiction of the herd mentality’s ignorance, and its willingness to cave in to fear, feels eerily familiar in our current era of Trumpiam bombast. Current politics have revealed a surfeit of bigotry prompted not only by the presidential candidate; economic tides (a recession, Brexit) have given citizens all over the globe license to embrace a hatred of the Other (justifications ranged from piety, to the perception that certain foreigners are either terrorists-in-waiting, or live only to rob us of food and jobs while we sleep).

In The Crucible the history that repeats is distilled in language so heartbreaking you can only gasp and nod at the truths its characters utter. At one point, the protagonist John Proctor (an excellent Ben Whishaw) exhorts, “There is fear in the country,” referring to the brushfire of accusations spreading from town. But it was when one character warned, “Look to yourselves,” that my anger welled up. The Crucible demonstrates how easily it can happen again. The night I attended the audience—a mix of tourists and natives—hung onto every word; in an election year, the metaphor of disparate groups coming together seems a pipe dream. One can only hope our hinterland guests take the word back to their brethren. We’re in a moment: how crucial that we indeed look to ourselves as well as our neighbors, and take heed.